Edit
watch 01:54
Arcane: League of Legends - The Loop
Do you like this video?
Play Sound

This article is about the Fittan on the highway. For other Fittans, see Fittan (disambiguation).

4-speed manual, Rear Wheel Drive
The Fittan is a non-driveable vehicle based on the Fiat/Seat 133 which can be seen driving randomly around the highway.

Unlike Pena's Fittan, this Fittan appears to be in better shape, with a complete set of hubcaps and no blemishes on its red textureless body. However, it similarly emits a engine sound that resembles a high-pitched Satsuma. Prior to the 12.08.2021 update the car also formerly sported a mismatching green passenger-side door. As with most other vehicles on the highway, the Fittan spawns when the player enters the highway for the first time during a game session, but only spawns at night since the 12.08.2021 update, often when the player takes Jokke home during early mornings.

A wrecked Fittan can be found at Fleetari Repair Shop and next to Toivo's house. 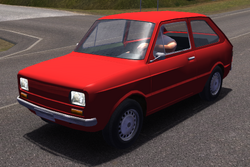 An earlier version of the highway Fittan with its mismatched door and no license plates. 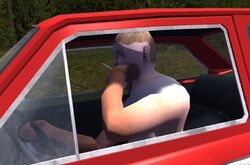