Edit
watch 01:54
Arcane: League of Legends - The Loop
Do you like this video?
Play Sound

The logging Gifu was a drivable logging truck with a trailer present in older builds of the game. It was unable to be found on the map, instead it was spawned at the house by typing the command "sisu" and later "gifu" into the console. The logging Gifu was eventually replaced with the sewage-pumping Gifu which is still present in the game today.

The finalized version of the logging Gifu was almost completely identical to the earliest version of the sewage-pumping Gifu, the only difference being the load it carried. The logging Gifu carried a large load of logs and towed an equally large trailer. It featured the same 14L turbocharged diesel and 12 speed gearbox as the sewage Gifu, producing 405 HP and lots of smoke.

The truck first appeared in May 2015 as a very basic, unfinished template for later versions. The cab was based on a Ford W9000 and its load consisted of only white boxes, both of which were only placeholders. As development progressed, the truck's cab and chassis were changed to resemble that of a Sisu M-series. The white boxes were replaced with logs and several other details were added. Originally, it had a blue cab and red chassis, that was later changed to a red cab and gray chassis. The finalized version of the logging Gifu was given dirty textures and a striped paintjob, identical to those of the sewage Gifu. 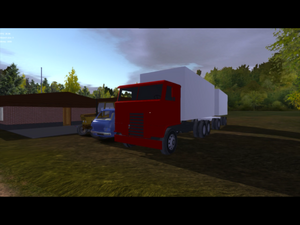 The earliest version with the Ford W9000 cab. 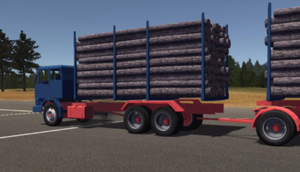 The blue version with trailer seen at the airfield. 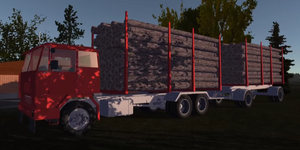 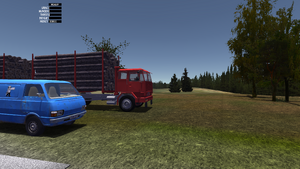 As seen at home by to the Hayosiko. 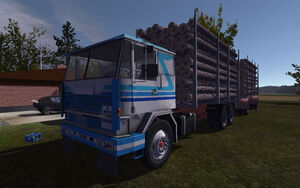 The final version, complete with textures.

Community content is available under CC-BY-SA unless otherwise noted.
Advertisement