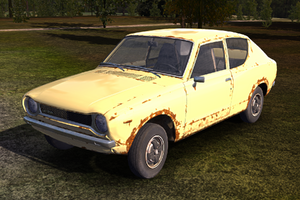 This is the troubleshooting page for Satsuma; it contains solutions to the most common issues about the subject. Use the article comments at the end of the page for sharing any issues that are not currently present here.

Issues during the building process

The following issues might arise during the building process of the car, before any attempt to start it has been made:

I cannot attach a specific part

A) The part attachment might have bugged out; saving and reloading should fix this.
B) The part might require further assembly before it can be attached, such as the halfshafts requiring the disc brakes.

I cannot find a specific part

A) An update might have changed the initial position of the part, such as the stock wheels being moved to the mansion; see Car parts#Other parts for a list of parts like these.
B) The part might have fallen through the terrain and respawned at the landfill site; check there if the part is not on the list from solution A.

Liquids are not staying in their respective reservoirs

A) There is a loose/untightened bolt somewhere in the car; use this page to check which one might have been overlooked.

My car started sparking/caught fire while tightening in the battery

A) The negative (black) side of the battery was tightened before the positive (red) side. Never leave the negative side bolted in on its own, as this will cause an electrical fire.

Issues when trying to start the car for the first time

The following issues might arise when attempting to start the car after it has been fully assembled. This section assumes that all of the damageable car parts have been replaced/serviced by Fleetari prior to the engine assembly:

The car doesn't make any sound

A) The car has not been wired properly, go through the checklist on this page and double-check that no wires have been missed.
B) The starter has not been fully bolted in; there are 2x7mm bolts that attach the starter to the engine (one of them also acts as the ground attachment for the electrical circuit), and 1x5mm bolt for the starter motor wire.
C) The battery is dead or not attached properly; it is attached with 2x8mm bolts (never leave the negative black side tightened on its own!), check the battery life with the battery charger first: if the needle is all the way to the right, the battery is dead. The stock battery is most likely already dead if this is the first time it is being attached to the charger.

The car makes a cranking sound, but doesn't turn over

The car starts, but doesn't stay turned on

A) The spark plugs are not tightened, thighten them up with the Sparkplug wrench.
B) The car has a lack of tuning; pull out the choke, keep the throttle pressed (don't redline!), and wait for the engine temperature to reach 80 °C (halfway mark on the gauge).

A) This is likely due to the car not containing any fuel. Check the fuel level and try again.

Issues after the car has been started

The car will likely have most of these issues regardless of how well the assembly went, as they are tuning related and can/should only be fixed when the car is running steadily:

I hear a high-pitched chirping sound

A) The distributor is not tuned properly, see this page for a tuning guide.

I hear a squealing sound

A) The alternator is not tuned properly, see this page for a tuning guide.

I hear a constant clicking sound

A) The rocker valves were adjusted at some point prior to starting the car, and should be reset. This can be done by scrolling down 20 or more times on each valve with the screwdriver, then scrolling back up 8 times.

I hear an infrequent clonking sound

A) The camshaft was incorrectly tuned during assembly. Turn the car off immediately if this sound is heard, as it is the most damaging part to tune incorrectly. See this page for a tuning guide.

The exhaust smoke colour doesn't change when tuning the carburator

A) The choke is still pulled out, and has to be pushed in.

A) The air/fuel ratio is too lean. This could be caused by tuning the carburator improperly, or the engine overheating.
B) The camshaft gear is not aligned properly
C) If the carburator is tuned properly, the vehicle simply hasn't warmed up. Allow it to idle until the temperature gauge's needle is in the center.

There is a red light on the dashboard

A) The red light means that the alternator is not working as well as it should. This is likely caused by the air/fuel ratio being too lean, which in turn is not rotating the crankshaft pulley fast enough for the alternator while the car is idling.

A) The fuel tank has not been wired up.

A) The accessories have not been wired up properly, double-check the wiring using this page and make sure everything is attached.
B) The battery has died due to the alternator not giving enough charge. This is likely caused by the alternator belt snapping, or not being installed in the first place.

A) The spark plugs are either completely burned out, or not tightened enough.

Issues during/after the test drive of the car

The following issues are common during and after the first test drive of the car. This section does not take in account possible crashes with the terrain/other vehicles:

White particles periodically get squirted from the engine bay

A) This is caused by the radiator trying to keep up with the engine temperature rising, which is most likely a result of the throttle being fully open for long periods of time. This is difficult to avoid when driving with a non-analogue input device such as a keyboard.

The car keeps veering left/right on its own

A) The wheels are not aligned properly, or the suspension is badly bent. While it is unlikely that the suspension is bent, it is not impossible due to physics bugs present in the game (such as pushing the car around too aggressively, or getting the car stuck inside the garage pit). Try tuning the steering rods again before worrying about straightening the suspension at the repair shop; a guide for the alignment can be found on this page.

I hear an occasional gunshot sound after driving for a while

The gears keep changing on their own

A) Some of the bolts on parts that directly affect the gearbox behavior might be loose/unbolted. Double-check them by using the list on this page.

The wheels are spinning, but the car refuses to move

A) The handbrake is likely still engaged. Hold down the right mouse button while looking at the brake lever to fully disengage it.

The car is very sluggish to drive

The car turns off and refuses to turn over again

A) The battery has died due to the alternator not giving enough charge. This is likely caused by the alternator belt snapping, or not being installed in the first place.
B) Make sure that the rocker shaft is not broken.

A) It's completely normal !!! It turns very slowly at high speed so as not to lose control of the car. You can change this in the settings under the name "High speed aid"

Issues coming up after driving the car for a long time

This section covers issues that might come up after the car has been driven for tens/hundreds of kilometers. These issues are not directly caused by the user, but rather come up suddenly while driving the car normally:

The car is shaking violently

A) The crankshaft is almost broken, buy a new one or service the current one at the repair shop.

There is smoke coming from the engine bay

A) The head gasket is almost broken, buy a new one or service the current one at the repair shop.

A red light on the dashboard turns on at low RPM

A) The alternator or water pump is almost broken, buy new ones or service the current ones at the repair shop.

The car is making a constant squealing sound

A) The alternator belt is loose, it can be tightened by loosing the the alternator with the screwdriver form the spanner & or ratchet set and using the scroll wheel to tighten it until until the squealing stops.
B) The Water pump has broken down. The pulley has jammed causing the sqealing sound. Have it serviced or buy a replacement at the Fleetari Repair Shop

The car is underpowered and the RPM goes up and down

The gears are changing on their own

A) The gearbox is almost broken, buy a new one or service the current one at the repair shop.
B) The clutch fluid is almost completely depleted, buy more and fill up the reservoir.

A) The starter is broken, buy a new one or service the current one at the repair shop.

I heard two loud bangs from the engine bay, and the car refuses to start again

A) The rocker shaft is broken, buy a new one or service the current one at the repair shop.

One or more of the wheels have sunken into the ground

A) The tyre(s) have been punctured or have just worn down on their own, replace them with new ones from the repair shop.

The car has suddenly started veering left/right on its own

A) The car's suspension has been damaged, repair it by choosing the "suspension straightening" option at the repair shop.

A) The brake fluid is almost completely depleted, buy more and fill up the reservoir.

The car struggles to keep RPM up, and/or refusing to start again

A) The car has run out of fuel, use a full Jerrycan to fill it back up or tow it to Teimos using the Gifu or Kekmet.
B) The fuel pump has died/is close to breaking completely, remove the pump and go to Fleetari Repair Shop to purchase a new one.

A) The sparkplugs have worn out and need to be replaced. They can be purchased at Teimo's shop.

Community content is available under CC-BY-SA unless otherwise noted.
Advertisement