Edit
watch 02:52
Roblox: DeepWoken - The Loop
Do you like this video?
Play Sound

This article also has a troubleshooting page.
This article is about the player's Satsuma. For the abandoned version, see Satsuma GT (abandoned).

Varies on how modified

The 1974 Satsuma AMP is a subcompact Japanese coupe based on the Datsun 100A/Nissan Cherry E10. It is the player's car and the principal vehicle in My Summer Car, serving as the player character's project car.

Its age is further reinforced through the intro of the game, which shows the player's mother giving birth to the player in the back seat of the car in 1976. It can be assumed that the family-owned that car back then, and its more pristine condition circa 1976 suggests a 1973 to 1976 model, judging by the rear lights available back then. Final drive flanges are triangular. Together with bigger tail lights, this tells us that car is either a 1973 or 1974 model. Later models shared the round flanges with the successor model F10 that was introduced in Japan in late 1974. Sales of this "Cherry F-II" model started outside of Japan a couple of years later, in 1976. Production of these two Cherry models overlapped a couple of years. The official model year of the car was finally confirmed through the updated drag race time slip, which refers to it as a 1974 model, making the car 21 years old as of Summer 1995.

From the note left by the player's parents, we can clearly make out that this car belongs to the player's father. The parents also say that it will be sent to the junkyard if the player doesn't do anything with it and that he can keep it after he assembles it and makes sure it passes inspection. It is implied the Satsuma is the player's 19th birthday gift because of the birth sequence in the intro.

The idea for the car likely originated from the Finnish comedy and drama film Pohjanmaa, since, like the Satsuma, the Datsun in the movie doesn't have a gas tank door and has the same license plate like the one received in the game after inspection: VBX-403. A yellow Datsun 100A with leopard seat covers is also featured in the film Vuonna 85 ('In '85').

The Satsuma is equipped with a 1.0L (988 ccs) inline four-cylinder gasoline engine, with a front-wheel-drive four-speed all-synchromesh manual transmission and features a four-wheel independent suspension.

Compared to other drivable vehicles in the game, the Satsuma is one of the most technically complex vehicles in the game, with a fully-working and accessible engine, chassis, drivetrain, suspensions, cooling system and electrics comprising of a large number of individual parts to be assembled with the aid of a toolbox (a spanner or ratchet set). The car's original wheels comprise of narrow steel rims with worn road tires (which can be adorned with stock hubcaps) that must be salvaged from elsewhere in the beginning. The car is also highly customizable with a myriad of available performance parts and cosmetics as well as tuning options. Its interior is among the earliest vehicle interiors in the game to be fully-functional, with working sun visors, window winders, dashboard instruments, window wipers, mirrors, a folding passenger seat, seatbelts, and a glove compartment (added in the 17 April 2017 update, along with the circular black fuel cap).

The car's stock parts are typically revealed to be wholly inadequate for long term use, with parts starting out with a mixed bag of conditions, the radiator struggling to keep the engine cool, the worn suspension system and tires poorly suited for dirt roads, constant leaks of the motor oil and brake and clutch fluids even when the car is not running, and an aging stock oil filter and battery in need of replacement. A considerable number of parts can also deteriorate from use (i.e. tires and engine components) or detach from impacts (i.e. the fuel tank, bumpers, doors, etc.). For these reasons, the player is expected to constantly conduct maintenance and repairs on the Satsuma and replace many of the stock parts out of necessity. The Satsuma is also the only vehicle to store body deformation data.

The top speed of the Satsuma varies. At the car repair shop, a lot of final gear settings can be chosen (see below), which changes the top speed and acceleration of the car. 3.700 is the longest ratio and gives the highest top speed, over 220 km/h.

It is highly recommended to buy the air-fuel gauge and extra gauges while rebuilding the car. With that said, you can easily tune the carburetor at home with the air-fuel gauge. The extra gauges are just needed to check the oil pressure and battery charge. Other than that, you should try to find the RPM gauge. After all, the car's clock is just useless when you've got yourself a fancy watch after fighting at the pavilion. Last but not least, if you've got the dough, buy the racing radiator as soon as possible. The stock radiator is half dead and if you want to keep using it, pair it with the GT grille instead.

The car has no anti-roll bars, making it easy to flip and make barrel rolls if crashed at a high speed.

The Satsuma can be painted with a custom template. You can do this by picking the "Custom paint made by artist" option in the brochure at Fleetari Repair Shop, after having edited the template in the game's folder. Below are a couple of example paint jobs.

The below skins are only for demonstration. If you'd like to share your own creations, please do so on the Reddit or the Steam car skin thread, as the wiki is not a personal file host. 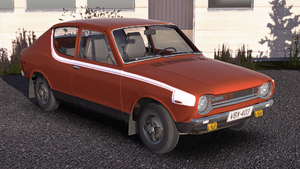 A replica of the Pohjanmaa Satsuma. 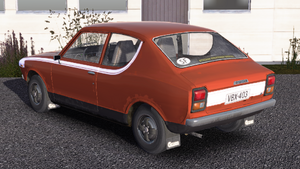 Rear-view of the same car. 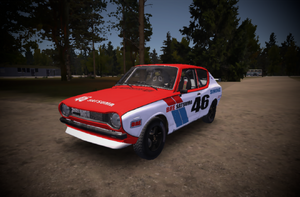 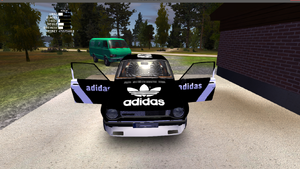 The idea of a Satsuma GT variant was first hinted in the 18 August 2018 update, which introduces a GT grille that can be fitted on the Satsuma.

Following the 20 August 2019 update, an upscale GT spec Satsuma is explicitly revealed to exist in the game's canon. Based on a poster of the car in the player's bedroom, the Satsuma GT is touted as having a twin-carb upgrade on its existing 1.0L engine that increases its horsepower to around 70 hp, capable of top speeds of around 190 km/h and an acceleration of 0-100 km/h in ~12 seconds. The variant is also equipped with a front and rear spoiler body kit, GT paintwork in either orange or green, sporty 8-spoke rims, as well as an RPM gauge in place of a clock, and a premium steering wheel and central short-shifter console with wood grain finishing.

While the player's Satsuma does not start out with a GT trim, the player can eventually fully outfit the car with GT upgrades, a requirement to complete the "Satsuma GT" achievement. The complete list of necessary components to unlock the achievement includes a GT grill, a center console, GT rims, a GT steering wheel, a GT rocker cover, special GT trim body paintwork (available from Fleetari's workshop), a front spoiler, a rear ducktail spoiler, a window grille, twin carburators, and an RPM gauge on the dashboard meters.

The Satsuma GT is suggested to be inspired by the Datsun 120 GX prototype.